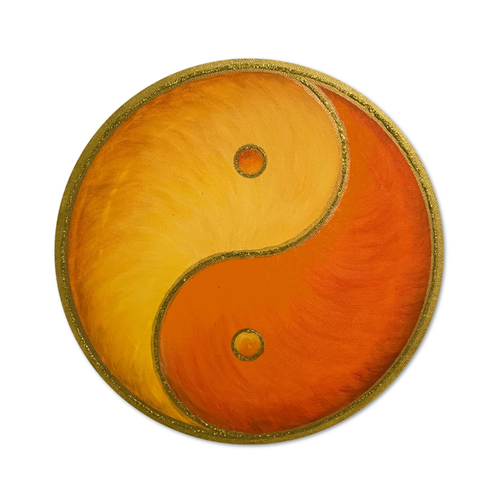 In a nutshell, the Chinese Yin Yang symbol represents a perfect balance. Apparently the whole Chinese philosophy is based on the concept of Yin and Yang – opposites, interaction and supposedly the seed of all things. For example, the negative results from an imbalance of Yin and Yang and the positive comes when both are in harmonic balance. That sounds perfectly logical, doesn’t it.

To illustrate the understanding of the characteristics of each side of the symbol, I have once illustrated the opposites in the following table. Each property is assigned under its corresponding energy, the Yin or Yang. The Yin Yang meaning of each energy should be clear.

A few more points about the Yin Yang meaning

Neither yin nor yang are absolute. Nothing is completely yin yang or complete. Every aspect contains the starting point for the other side. For example: day becomes night and then night becomes day… Yin and Yang are always connected.

Yin Yang is not static. The Yin and Yang flows and with time it changes. An example is how the day slowly turns into night and vice versa. But the length of day and night will never change. Day and night are not static. Some changes in the relationship between Yin and Yang can be dramatic, where one aspect literally changes into the other. For example, some fish species have females that can transform quickly if the males are not enough.

The addition of Yin and Yang forms the harmonious whole. A consequence of this is:. One aspect increases the other decreases to obtain the overall balance of the whole.

The balance of the Yin Yang can be disturbed for example by external influences.

Four possible imbalances can be:

These imbalances can be combined: if there is an excess of Yin, a Yang deficiency can be simulated and vice versa.

This concept is especially important for Chinese healing practices. An excess of Yang thus leads to fever. An excess of Yin could mean the accumulation of fluids in the body. The Chinese healing method is built around these eight principles: internal and external stimuli, deficiency and excess, cold and heat and yin and yang.

The terms listed here are only a starting point to illustrate the nature of Yin and Yang. In theory, Taoism is not a doctrine that defines everything precisely.

The following Yin Yang symbols and short descriptions are shown as examples for the use of the symbol:

This is the basic Yin Yang symbol. As mentioned above, this symbol represents duality, but also that to every force there is a counter force in all things in the universe. It also shows us the necessity of balance in all things. This Yin Yang meaning is well known and widely spread.

The Yin Yang enclosed in the lotus flowers is a particularly powerful and balancing symbol. Buddhists all over the world know that these lotus blossoms mean the holy seat of the Buddha. For the Chinese, it symbolizes the ultimate purity and perfection, the immaculate what is reborn. The lotus flower in combination with the balance of Yin Yang make this a perfect union of body, mind and soul.

An artistic view on the traditional Yin Yang. This symbol stands for our focus or view of balance – inwards and outwards. This is a beautiful symbol and expresses the vision for peace and balance.

Balance in our hearts and love in our lives is the most important thing in our lives. This traditional Yin Yang symbol in the shape of a heart reminds us that love is the truest of all virtues.

I hope you were able to take some artistic ideas from the article Yin Yang meaning to let your creative energies flow.

Is there a connection between the Yin Yang symbol and the flower of life?

Finally, I would like to point out a connection that perhaps only a few people know about, but which is very important to better understand the connection between the Yin Yang symbol and the flower of life. I am talking about the relationship to the flower of life! If you look closely at the symbol, you will find the Yin Yang aspect, a bit hidden, but it is there. I leave it to your fantasy to find it :-).

Of course I would not like to withhold our Yin Yang energy art from you :-). If you want to know more about a special picture please click on it. You will then be taken to the product page of the Yin and Yang Energy Picture.

Should you now feel like painting an energy picture yourself, then I can warmly recommend our online painting course.

The first online video course is about the flower of life, here you can learn more about it.