The spiral is a very feminine symbol, it seems to be infinite. 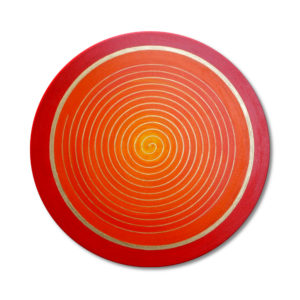 The spiral form can be found in all ancient religions: e.g. in Celtic ornaments, but also in Christian churches.

A sine wave is found in the center of everyone.

The yin-yang symbol is also formed by a sine wave.

Spiral movements are everywhere in the universe, they are the sign
for liveliness and dynamism.

If we look at our universe we find that it is a huge spiral nebula.

Likewise, the alternating current always moves on a conductor in left and right rotations.

In humans we find spirals in many places, e.g. the summit
of our heart muscle, on the skull is the fontanel
this is also one.

When the water flows out of the toilet or bathtub, it does so in a spiral.

With his knowledge of water swirling, Viktor Schauberger has inspired many people to develop new technologies for water revitalization.

So you can say life moves in a spiral. Trees spiral up into the sky, plants do the same. This can be seen particularly well on a pine cone. This grows upwards in a rotary motion.

More about the spiral symbol can be found here: spiral meaning